5 Comments
By rosemarystclair Thoughts and Observations

As a quick refresher, the Japanese invented square watermelons so they would fit better in the small size refrigerators they use in their homes. The skins are the same. The color, the pattern and the fruit itself even taste the same. So why does it seem so strange?

Our goal in moving to China was to explore the world outside our comfort zone. To find the differences and celebrate the things that are the same. I call those things Square Melons.

With the passing of our first 90 days of living in Shanghai I thought we would share some of our observations and some of the Square Melons we have discovered.

First, there’s no tipping in China. You don’t tip the cab drivers, you don’t tip at the hair salon or nail place and you definitely do not tip at a resturant. Tipping in China is considered by some as impolite or that one’s work is undervalued by the employer.

So okay, no tipping. It feels really strange, especially when we’re receiving some of the best service we’ve ever received and you don’t tip. 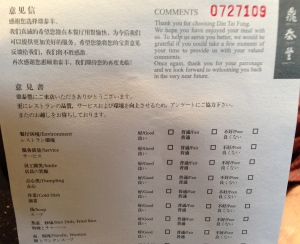 Now what’s interesting and definetly a Square Melon moment is when your wait staff hands you a short survey to complete about the overall service. You’re asked to rate the environment, the appetizers, the food, even the “smile.” All in an effort to improve.

Twice now, I’ve completed the form by checking the boxes but left the space for written comments blank. Our waitress hands it back to me and points to the section. I quickly write something like “Jasmine’s (most wait staff wear name tags) smile was warm and welcoming and we really enjoyed the dumplings.” Jasmine seems thrilled and extremely grateful when we hand it back. Can you image what will happen next time at The Olive Garden in Beaverton when I leave a handwritten note instead of a tip?

Men first. Something that has taken a little getting used to for both Greg and I is the fact that men are served first. In Chinese custom, the most senior male by social ranking and age are served first. Same with entering a door or an elevator. Greg has had several stand-offs with women as he tries to get them to enter a door first.

Do not leave any gaps when standing in line. If you leave any space, personal space, someone will fill in. If you’re waiting in line at the grocery store, Starbucks or the ATM, do not leave what you believe is appropriate space or you’ll find someone “cutting” inline. Greg once left some space between us at the Starbucks and a man cut in and was standing so close to me, I could feel his breath on my neck. I turned around ready to tell Greg to step off only to find a strange man between us.

Something similar happens in elevators. In the morning there is a line waiting to get on one of the six elevators going up to the NIKE offices. People pack themselves into the next available elevator so tight, one of my co-workers has termed it “nuts to butts.”

On a positive note, at least for me, handshaking is the expected greeting. No hugging, no kissing and mostly when a man greets me, a woman, he just nods to avoid the handshake. All good here.

I’ve been to several dining events now where toasting at the table is a ceremony in itself.  When someone calls for a toast, which by the way, is throughout the entire meal, you are expected to finish whatever is in your glass as a sign of respect to the one you are toasting. This is called ganbei or as you may know it, bottom’s up. And because the service is so great, there is always someone right there to refill your glass.

After a 3 hour luncheon, you can be in a pretty good mood or ready for a nap. Rumor has it, they do this with business partners to find out your true personality. Well guess what? My personality is the same only I’m much funnier. I think. I can’t really remember.

I was also taught that when clinking your glass with people at the table, you should lower your glass to anyone who is considered higher status then you, and anyone your junior should lower their glass to yours. I wasn’t always sure so I just lowered my glass with every toast. One man, lowered his after my gesture and I think I chuckled out loud at the visual of us both ending up on the floor trying to “out respect” one another.

As a pedestrian, you do not have the right of way. Not in a cross walk, not in a parking lot, not on a side walk. That’s correct. Not even on the side walk. Bicycles and motor scooters can and do use the side walk and they have the right of way. Greg and I learned the hard way one night, while walking home on the side walk. A silent, electric motor scooter who’s operator chose not to use his headlight, almost wiped us out as he passed. Hey. How about a little beep of the horn? Or why not do what we do while riding bikes in Sunriver or Black Butte – we simply yell out “on your left.” That could work.

I learned the number 38 could be a problem when identified with women. It sounds much like the word sanba which can mean bitchy. In China, on 3/8 women get a half of day off of work. Restaurants and shops offer special deals to women and most cities celebrate her. Curious why March 8th, 3/8, is International Day of Women. Ironic, isn’t it? Or is it? I’m afraid to ask.

A few observations and learnings after our first 90 days. We’re loving the experience and learn something new every day. It’s exhausting and energizing at the same time. So much to share with our friends and family as we head back to Oregon for Christmas and the New Year. Ganbei my friends. Ganbei