6 Comments
By rosemarystclair Thoughts and Observations

“Just how long is the Chinese New Year holiday?” I had to ask after last year, when I was surprised as I came back after the week long, NIKE paid holiday, and found the office mostly empty.

This year I had it all figured out. The NIKE paid holiday begins on a Thursday and ends the following Tuesday. The holiday runs through the weekend. With the break in the middle of the week and the fact that a billion people are traveling throughout China, many people make this a 2 – 3 week holiday and wrap their vacation time around the paid holidays.  Fair. We do the same in the U.S. around Christmas and New Years.

So when the office reopened and we got back together it was the first time we had seen each other for a couple weeks. When I asked a couple co-workers how their holiday was the both replied that they were exhausted. They had to be the “babysitter” the entire time. When I dug in with questions, they shared that due to the holidays, each of their Ayis (nanny, cook, maid) was on holiday and went home to see their familes so they had to take care of their kids. I don’t think I let the sentence finish for more then a second or two and I blurted out “Uh. Yes. It’s called parenting.”

Later in the day, I shared the conversation about “parenting” in our staff meeting and immediately, one person piped up that he checked his family into a hotel for the time their Ayi was away. “Who would cook for us?” I love this. We spent the first half of our meeting comparing the differences between our cultures.

Not one of the Chinese in the room, can or has ever cooked. They eat out, get “take away” or have their Ayi prepare meals. Most of their parents live with them and for a few of them, their mothers cook for them everyday. The folks from the U.S. and the one Australian in the meeting were loving the conversation and glancing at each other as this all seemed so foreign.

A week later, I received a call on my cell from a U.S. number. It was the company I had signed up with as a medical alert system for my mom who lives alone in Portland.

I’m the first point of contact if they are alerted by the necklace my mom wears or if they detect something wrong with the system. They were calling to let me know they detected a power outage at her house. I immediately called my brother who is the second contact on the list and he was already aware and in fact had my mom at his home. First time in 2 years it had been tested and we were both impressed with how well the system worked.

I shared this experience with some of my co-workers and how impressed I was at the efficency of it all and the look on their faces must have mirrored mine as they described not being able to cook or having to take care of their kids while their Ayi was away.

“You take care of your mom with technology?” “She doesn’t live with your brother?” “She lives alone?” They glanced around the room, giving each other a look as this all sounded so foreign to them. 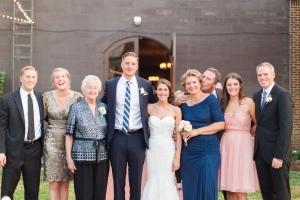 Bryan, Katie’s boyfriend. Our daughter Katie. My Mom. Matt, our son. His wife, Leanne. Me. My brother Ray, the photo bomber. Our daughter, Meredith. Greg.

6 thoughts on “The Parent Trap”