7 Comments
By rosemarystclair Thoughts and Observations

“Did You Mean Taipei?”

A co-worker, friend of mine, was once asked if he was interested in the Marketing Director role for Taiwan. When he attempted a search on the city where he and his family would live, Google came back asking “Did you mean Taipei?” With that, and perhaps a few other considerations, he decided that if he couldn’t spell the name of the city where he was going to live and work it probably wasn’t for him. He went on to do great things in London.

This last weekend, we went to Taipei, Taiwan for business travel and some fun. NIKE has deep roots in Taiwan with early manufacturing relationships going back to the late 1970’s. Some of NIKE’s first employees in Asia were hired and still work in our NIKE offices in Taipei.

It was incredible to walk the streets of Taipei and visit stores where NIKE is sold. We talked with staff to hear how we are doing as a brand and learned where we could improve. I was overrun with pride as the NIKE brand is strong in Taiwan.

Interesting to learn that 7-Eleven holds the number one position for most recognized brand in Taiwan. It becomes very clear when you find a 7-Eleven on every other block in the city. Green tea Slurpee anyone?

The “fun” part of the weekend was getting to experience and participate in The NIKE Women’s 1/2 Marathon. NIKE has held these events in San Francisco and D.C. but this was the first of it’s kind in Asia. I’ve attended and participated in the other runs so I was anxious to see how this would compare. I was not disappointed. 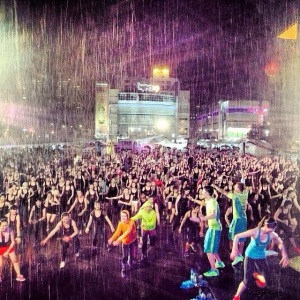 Incredible to see 2000 women show up on Friday night in the rain and participate in the NIKE Training Club event. Two hours of a high impact workout. No big deal until you consider it was pouring buckets of rain the entire time. The rain didn’t dampen any spirits it only added to the experience. The crowd went crazy, turning the event into a dance party in the rain.

The weather in Taipei is tropical this time of year. Humid and hot with daily downpours. The Taiwanese are use to thunderstorms, typhoons and occasional earthquakes. It seems to only make them stronger in their determination to not let the weather or natural disasters get in the way of a good time.

Sunday morning was race day. Because of the heat and humidity the race starts at 5:30am for the marathon and 6am for the 10k. I don’t want to mislead you by calling this a race where I’m concerned. Yes, for sure, it’s a race with real winners but for me, it’s a run. I also don’t want you to think I ran the 1/2 marathon. I participated in the NIKE Women’s 1/2 Marathon by running the 10k.

There. I feel better now after confessing.

I did however line up, by accident, with the 1/2 marathon participants. By the time I realized it, the gun had gone off and the race had started. It seemed more disruptive to try to make my way to the side than to just let the 7500+ women run by me. I made the best of it and did a shoe count while waiting for the 10k participants to be allowed into the starting gate area. NIKE faired pretty well with about 6 out of 10 runners wearing our brand. That’s not official so any NIKE people reading this, simmer down, be patient and wait for the real count from the experts.

So there I was. Super proud of NIKE hosting the first Women’s only 1/2 marathon in Asia. Inviting 15,000 women to run either the 1/2 marathon or the 10k. Whoever said people, especially women, don’t workout, train or run in Greater China might want to come over and take a look for themselves. They workout in the rain. They run in extreme heat. And maybe most importantly, they have fun.

I leave you with this visual. Me, at the 10k starting line, in my first ever international road race/run. Just me, trying to fit in, among 15,000 of my fellow runners. Can you spot me? 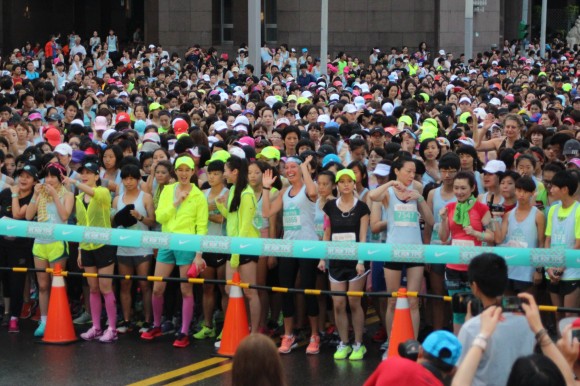 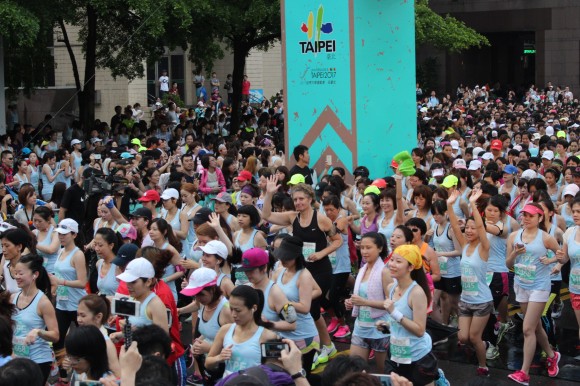